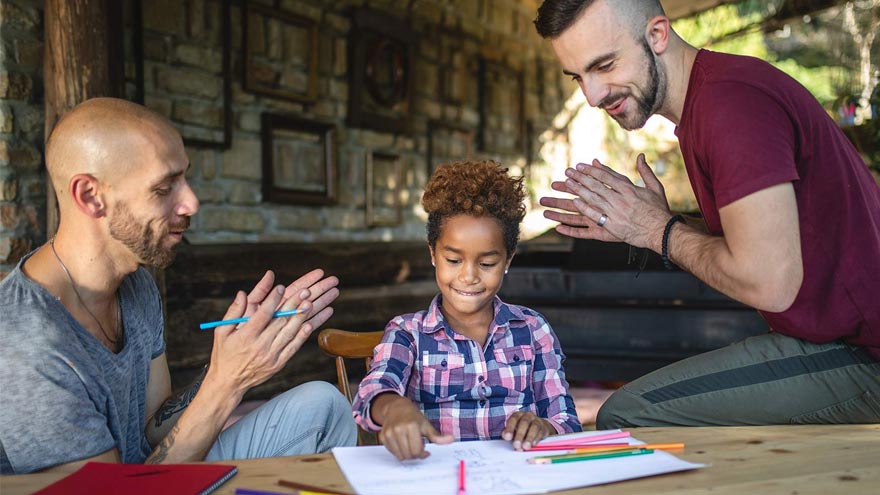 SOGI stands for sexual orientation and gender identity. Being a SOGI-inclusive medical facility means regardless of our differences, we treat others with dignity and respect. Sean Savoy, Renown Health Manager of Spiritual Care, explains SOGI terms and their importance in a healthcare setting below.

Although the UN passed a historic resolution on SOGI in 2016, it is still a relatively new term for some. Above all, an inclusive environment where every patient feels safe and valued, improves the quality of care in our community. In reality, defining gender and sexuality can be confusing. However, the terms we use to define gender and sexuality are an important influence on how we relate to each other.

Generally, "sex" refers to the biological differences between males and females. Still the term “sex” doesn’t fully capture the complex biological, anatomical and chromosomal variations that can occur. Accordingly, having only two (binary) options – biological male or biological female – might not describe what’s going on inside a person’s body.

In essence, assigned sex (also called "biological sex) is given at birth based on medical factors. These include your hormones, chromosomes and genitals. Most people are assigned male or female, and this is what’s put on their birth certificate. When someone’s sexual and reproductive anatomy isn’t clearly female or male, that person may be described as “intersex.”

However, a person’s biological or assigned sex may be different from a person’s actual or perceived gender identity or expression. The word “gender,” therefore, is more difficult to define. It could refer to the gender or sex role society determines is acceptable, desirable or appropriate based on a person’s perceived sex. Likewise, it could refer to an individual’s own gender identity or preferred gender expression.

What is Gender Identity?

To summarize, gender identity is one's innermost concept of self as male, female, a blend of both or neither. To clarify - how individuals perceive themselves and what they call themselves. Of course sometimes a person's genetically assigned sex does not line up with their gender identity. These individuals might refer to themselves as transgender, non-binary, or gender-nonconforming, for example.

Another key point is the process of gender transition. This specifically refers to more closely aligning your internal knowledge of gender with your outward appearance. According to the American Psychiatric Association's Diagnostic and Statistical Manual of Mental Disorders (DSM), the term – which replaces Gender Identity Disorder – "is intended to better capture the experiences of affected children, adolescents, and adults."

What is Sexual Orientation?

Sexual orientation is an internal or enduring emotional, romantic or sexual attraction to other people. For example, you could be heterosexual (straight), gay, lesbian, bisexual or even pansexual.

Below are some common SOGI terms according to the National LGBT Health Education Center and the Human Rights Campaign. The following list is not meant to represent every term (or definition) used by the LGBTQ+ community.

Stands for lesbian, gay, bisexual, transgender and queer (or questioning). The plus encompasses other identities that fall under the queer umbrella with one common theme: they are not strictly straight or cisgender.

An umbrella term used by some to describe people who think of their sexual orientation or gender identity as outside of societal norms. Some people view the term “queer” as more fluid and inclusive than traditional SOGI identities. Due to its history as a derogatory term, the term is not always embraced or used by all members of the LGBTQ+ community.

(adj.) – Describes a person who experiences little or no sexual attraction to others. Asexuality is not the same as celibacy.

(adj.) – A sexual orientation that describes a person who is emotionally and sexually attracted to people of their own gender and people of other genders.

(adj.) – A sexual orientation that describes a person who is emotionally and sexually attracted to people of their own gender. It can be used regardless of gender identity, but is more commonly used to describe men attracted to other men.

(adj.) – A sexual orientation that describes a person whose sexual or emotional attractions and behaviors focus exclusively or mainly on members of the opposite sex or gender identity.

(adj., noun) – A sexual orientation that describes a woman who is emotionally and sexually attracted to other women.

(adj.) – A sexual orientation that describes a person who is sexually and emotionally attracted to people of any sex or gender identity. Pansexual people may refer to themselves as gender-blind, asserting that gender and sex are insignificant or irrelevant in determining whether they will be sexually attracted to others.

(adj.) – Describes a person whose gender identity is a combination of two genders.

(adj.) – A person whose gender identity aligns with the assigned sex at birth or biological sex.

(adj.) – Describes a gender expression that differs from a given society’s norms for males and females.

(noun) - The process by which some people strive to more closely align their internal knowledge of gender with its outward appearance. Some people socially transition, whereby they might begin dressing, using names and pronouns and/or be socially recognized as another gender. Others undergo physical transitions in which they modify their bodies through medical interventions.

(adj.) - A variation in sex characteristics including chromosomes, gonads, or genitals that do not allow an individual to be distinctly identified as male or female.

(adj.) – Describes a person whose gender identity and assigned sex at birth do not correspond. Also used as an umbrella term to include gender identities outside of male and female. Sometimes abbreviated as trans.

Again, not all people use the above terms in the same way, so respect and sensitivity are key. And the healthcare setting is an especially vulnerable one. Maintaining the dignity and humanity of every individual during a medical interaction is essential.

The U.S. Department of Health and Human Services requires all Electronic Health Record (EHR) systems be able to collect SOGI information from patients. This promotes better understanding of health treatment outcome disparities in order to reduce them.

Renown Health’s mission is to make a genuine difference in the health and well-being of the people and communities we serve.