Renown & The National Guard: How These Employees Serve with Maximum Impact 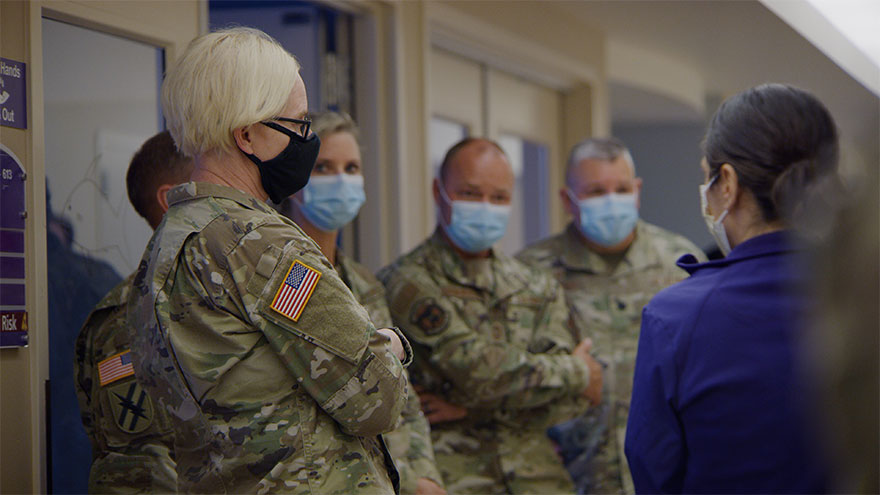 Jason Farnsworth, Evan Fox and Jennifer Jenni are three of Renown’s more than 500 employees who currently serve, or who have served, in our miliary. Their deep-rooted passion for helping our community extends to the Nevada National Guard (NANG), an organization that shares many values with Renown.

We sat down with Jason, Evan and Jenni to ask their perspective on what propels them to serve people in our home state and learn more about how Renown's partnership with the Nevada National Guard has supported their personal and professional growth.

Meet Jason Farnsworth, the Face Behind Renown’s Partnership with the National Guard

Jason Farnsworth is the Director of Respiratory Care Services at Renown and the Chief Master Sergeant, Medical Superintendent of the Nevada National Guard. He has been with the Guard and Renown for 23 years.

Jason joined the Guard over 20 years ago to help pay for his college education. After using up his paid vacation time from Renown for Guard events like deployments or training in his initial years as a Guard member, Jason approached Renown senior leadership with the idea of paid military leave.

“In full support of employees who choose to serve, Renown stepped up to give a resounding, ‘yes,’ as they have time and time again for our military community,” Jason said. From that day forward, policies were implemented at Renown to further support individuals who serve our country with paid military leave. As a result, Jason submitted an Employer Support of the Guard and Reserve (ESGR) Secretary of Defense Freedom Award nomination and Renown Health won the highest-level department of defense employer recognition in the nation.

Since then, Jason has received four associate degrees, one bachelor’s degree and a master’s degree with the government’s support and has been promoted several times to his current roles at Renown and the Guard. “As I progressed at Renown, I was able to progress in the National Guard. They've complimented one another on leadership skills and clinical competencies.”

After five years as a cardiac intensive care unit (ICU) nurse at Renown Regional Medical Center and two years as a First Lieutenant Critical Care Nurse in the Guard, Evan Fox has implemented care plans for many community members and put his expertise to good use.

The countless trauma hours he has completed at Renown have directly translated to the field as a Guard member. He states that “his roles are synergistic, and his innumerable hours of critical care are worth their weight in gold because of the transferability between the two positions.”

Evan’s Roles Provide Service to Our Community, and Beyond

Evan feels passionately that his experience with the Guard is unique because you live in the area that you serve, whereas with other military branches you are often stationed elsewhere. Recently, he’s cared for many people involved in firefighting missions in our surrounding areas.

Jennifer Jenni is the nurse manager of the cardiac ICU and intermediate care unit at Renown Regional Medical Center. She has been with Renown for 13 years and initially started at Renown South Meadows Medical Center in the general surgical unit.

She felt compelled to take advantage of Renown’s development programs as she worked her way up to supervisor and now as a manager. She is also a registered nurse and captain in the Nevada National Guard as well as a member of an enhanced resource force team, equipped to provide aid anywhere in the nation in the event of a disaster.

Her dedication to serving people has always been a part of who she is, even before she became a leader. From an early age, Jennifer felt strongly that she wanted to be involved in the military in some way stating that “the Guard is very much a service to the people, whether it's our community or nationwide.”

While her clinical leadership qualities and skills have translated well to her role as a captain, holding two leadership titles is no easy feat – especially when it comes to the continued training her roles require. However, because of the support Renown provides its military community, Jennifer was able to confidently attend officer training in Alabama last year. Jennifer was fully supported by her Renown team when she was away and took advantage of her paid military leave benefit.

More Than Just a Partnership, but a Family

Jason, Evan and Jennifer are among the many employees who choose to serve both here at Renown and in the Guard. You might see National Guard members who are also Renown employees in areas like the cardiac ICU, trauma ICU, emergency department or medics who work on hospital floors.

“Not only is my family out at the National Guard, but they are also here at Renown. It’s amazing to see how many people spend their lives giving back,” Jason said.